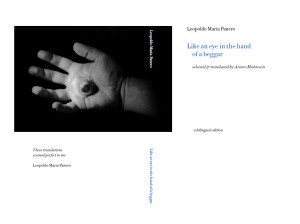 “…almost all [critics] agree that he is the greatest living poet in Spanish, and the most significant one since García Lorca and Aleixandre,” Arturo Mantecón writes in his introduction to his selected translations of Leopoldo María Panero Like an Eye in the Hand of a Beggar (17). A big claim, but I cannot disagree that the poetry is tremendous. Since the collection was published in 2013, Panero has died at the age of 65, and it seems more critical than ever for his work to reach the ample public it deserves through this volume, only the second collection to appear in English, championed by Mantecón. Any reader interested in poetry, and I would go so far as to say, any person concerned with the human condition, must read Panero.

For scholars of translation, however, the true delight of this collection is Mantecón’s mastery as a translator. With maturity, humility, and courage, Mantecón has rendered Panero’s poetry in an English that reverberates with equal vitality. Perhaps Mantecón felt liberated by Panero’s own theory as a practitioner himself that “translation should ‘…effectively elaborate upon—or surpass—the original and not transfer it [from one language to another]’” (18). By knowing when to depart from Panero’s poems, Mantecón has matched them in his translations. More than once, as I read to review, penciling notes in my copy, I struggled to approximate in letters the sound of my breath being whooshed away. There isn’t an adequate onomatopoeia for this sound in English, but I wrote my attempts above several of Mantecón’s translations.

Among the wonderful essays that accompany the poems, the scholar Túa Blesa asserts, “It is necessary to give Leopoldo María Panero credit for two great constructs: his life and his work” (21). Brilliant, schizophrenic, rebellious from an early age against the bourgeois mores of his family and the persistent fascism of his country, the prolific Panero is known affectionately as nuestro poeta maldito (our cursed poet) in Spain. Between Mantecón, Blesa, and editor Solomon Rino’s orientations to Panero’s poetry, there is a tension about where the life and work meet, a need to situate Panero among the great tradition of poète maudit, and a desire to protect his work from the dismissal of madness, in particular for a poet who had been both a victim of psychiatric treatment and a voluntary resident of a psychiatric hospital for the last decade or so of his life. It is a tension reflected in Panero’s body of work; as Rino recognizes, the death of the poet within his work is a way of murdering “stale, known linguistic forms,” destruction through a descent into madness that ultimately makes way for the new (30).

Mantecón’s mastery lies not only in his ability to, in his words, “capture the lucid madness of the poet,” but in his careful crafting through his selections from across the extraordinary body of work—Blesa’s complete bibliography cites more than 40 books of poetry alone—of a narrative arc that follows this descent into madness and ultimately poses an answer to the question of Panero’s sanity (18). The book begins with a brief “Dedication” that sets the scene: “I, who prostituted everything/would even whore out my own death/and make of my cadaver/the last poem” (33). From there, the book moves swiftly on to “The Madman” (“El loco”), where Panero’s prophetic ‘I’ echoes Lorca in Spanish and Ginsberg in English. Here, Mantecón allows himself to depart from Panero’s lineation, as he does in many of his translations, thereby replicating Panero’s rhythm with highly attuned sonic play and enhancing the formal assertions of the poem in English:

I have lived in the blanks of life
its equivocations, its oblivions, its incessant oafishness
and I remember its brutal mystery
and its tentacle caressing my belly and my buttocks
and my feet frenetic for flight.
I have lived its temptation, and I have lived the sin
of which no one will ever absolve us. (35)

Due to the relineation, without cutting anything, the resulting English poem appears shorter and wider than the Spanish. (Even in the small section I have quoted, the Spanish has two more lines.) By bringing up “torpeza incesante,” which he wonderfully translates as “incessant oafishness” to augment the hissing s-consonance of the line, Mantecón creates a longer line that forms a visual “blank” right where the poet has indicated. Nor does he shy away from opportunities for alliteration, one of the best qualities English has to offer as a language of translation, in “my belly and my buttocks” and “my feet frenetic for flight.”

As Panero deals with the death of the poem and the periphery between madness and sanity, his poetics is one of both lack and decadence. This is expressed nowhere better than in “The Four-Fold Form of Nothingness,” another example of where significant relineation was required to enhance the form of the English. In addition to the relineation, which in this case renders the English significantly longer, Mantecón has added two periods to Panero’s original two, breaking the poem up to create a ‘four-fold form.’ The first section reads:

Panero identifies three forms of Nothingness: the nothingness from which the poem arises, the nothingness of which the poem consists, and the nothingness in which it ends. Here, nothingness “is not a vacuum/but rather an amplitude of words” (137). Both presence and absence are heightened by the translation: what Mantecón renders as “vacuum” is vacío in the Spanish, often translated with the vague “void.” As in Panero’s poem, the word “Nothingness” (nada) is repeated throughout, often on the end of the line, but Mantecón capitalizes it, making it more of a presence.

By the end of the poem, Panero discovers the fourth form of Nothingness:

A witness, here, is its cadaver
where the poem gasps and dies
testifying that Nothing has been written
nor has it ever been written
and this is the four-fold form of Nothingness. (139)

Avoiding the easy cognate “quadruple” for the title’s cuádruple and triple for triple, Mantecón creates the rhythmic, alliterative “four-fold form” that echoes the undulations of ‘noth-ing-ness.’ By replicating the subject of Panero’s poem in the formal structure of his translation, Mantecón reinforces the function of this poem as a poetics through which the subsequent poems in his selection can be understood.

The stunning poem “This is Not About Rancor but About Hate,” is born of Panero’s own translation, making Mantecón’s translation a third voice in the conversation. The title in the Spanish, “No se trata de rencor sino de odio,” of which the English is a literal translation, is a creative translation of the epigraph from Stephane Mallarmé, “Ils convoitent la haine, au lieu de la rancune,” literally, ‘They covet hatred, rather than rancor.” As the poem’s many contradictions make clear, those who attempt to locate truth in verse will find it slipping away:

There is nothing so pure as hate
which this fountain pours forth like golden bile
and where there are thousands of flowers
emerging from the cruel tanglevine of Nothingness
thousands of quaking lilies
like a thousand mendacities.
I am someone who tells lies (199)

Mantecón brilliantly converts enredadera to the poetic “tanglevine,” adding the sense of entrapment which will later be extended to metaphors of the hunt. Because of the different syntax of Spanish, line order must often be inverted in English translation, but Mantecón accomplishes this without losing any of the gorgeous sonic play on the line endings in the Spanish—“cruel de la nada, miles/de temblorosas lilas/como mil mentiras” that is echoed in the English by “bile/lilies/mendacities/lies.” Writing poetry is an ultimately fruitless hunt for meaning; verses fix nothing in time, as the staggering ending reveals:

Because what I am
is known only by the verse
that is going to die on your lips
like the whinnying bellow
that puts an end to the hunt. (199)

Mantecón’s astutely ordered selection comes full circle in the last poem, “Correction of Yeats,” another poem in conversation, in this case with Yeats’s “A Prayer for Old Age”:

May God protect me
with more than his name
may God protect me
from being an old man
adulated by all and called out to by all
by the emptiness of his name.
Oh, what am I? Who am I
if I can do nothing more
than appear to be
—because of my love
of singing the entire song—
a complete madman?
[…] I pray that
even if it takes a long time for me to die
and have my name written, at last
on my tombstone
that they will be able to some day say
over that cold corpse
that I was not crazy. (271-3)

Here, the legendary life speaks through the work. The persona—admired, pursued, unknown—has superseded the person. “The emptiness of his name” could refer either to the name of the divine or to Panero himself, rendered an abstraction. While Yeats hopes to be remembered as “foolish, passionate,” Panero longs in his death for his work to be taken on its own merit. His is the prophetic voice of the Decadents whose songs of decay, hypocrisy, and moral corruption are called ravings by those who don’t heed their warning.

The evocative title of the book is discovered in the poem “Mutation of Bataille,” a poem that is gorgeous, even as it takes off from the surrealist writer and deals with the filth and violence of human connection, “and I have seen your pain as an act of charity/like someone delicately placing an eye/in the outstretched white hand of a beggar” (37). The title is, of course, not an exact quotation. As in his translations, Mantecón knows where to separate from Panero, making a claim about the poetry within that rings true. This is translation living up to its highest calling as literary criticism.

Panero, Leopoldo María. Like an eye in the hand of a beggar. Selected and translated by Arturo Mantecón. San Francisco: Editions Michel Eyquem, 2013.

← Forgotten Histories: Pierre Michon’s Winter Mythologies and Abbots, Translated by Ann Jefferson
At the Intersection of Poetry and Mathematics: Hilda Hilst’s With My Dog-Eyes, translated by Adam Morris →