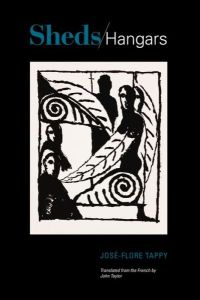 To hold an author’s complete works between two fingers is wonderful and disorienting—how can it be possible to condense so much experience and so many years into an inch of shelf space? Yet José-Flore Tappy’s recent collection of poetry, Sheds (in the original French, Hangars) does just that, benefitting from the equally experienced translator John Taylor. The concept is even more bewildering considering that the author pens her verses in slim columns that leave the right two-thirds of each page empty and ripe for exploration. These poems are dense but never heavy. They’re easy to take in slowly, or all at once.

Tappy, born in Lausanne, in the French-speaking area of Switzerland in 1954, has published six much-lauded volumes of poetry. She has also translated out of Spanish and Russian. Taylor is a prolific translator and author. Where many translators have returned to their native countries after a year or two, Taylor, born in Iowa, has been rooted in France since the 1970s.

The back of Sheds includes an interview titled “In Dialogue with José-Flore Tappy,” conducted by Taylor over the course of a month during 2012. Readers unfamiliar with Tappy’s poems—and many will be, as this is her English-language debut—would do well to take in its nine pages before diving into the poems: it is a Rosetta stone for this enchanting collection. Taylor, probably the person most familiar with Tappy’s oeuvre excluding the poet herself, develops long questions on specific issues: her infrequent “glances at or reminders of … the real world,” such as an epigraph in Spanish by Rafael Alberti about Lebanon at the beginning of “Wandering Mortal IV” (222). The poem begins with Tappy’s usual intensity “A violent scream / everywhere / tears us from the living” (41). Alberti’s words loosely bind this scream to a geographical place, with the effect that its volume increases and it resonates more deeply.

In the interview, Taylor clarifies that “The deserted ‘hangar’—to use your French term, which cannot be translated with the English ‘hangar’–is like a workshop or tool shed left behind, in a state of neglect, by a craftsman or a worker” (220). He mentions T.S. Eliot’s version of the “objective correlative” and the idea that an object or objects are used to express emotion in art. Tappy agrees, affirming that “it was important to avoid using emotive or psychological language. I was rescued by the different kinds of matter themselves, by humble ordinary things without prestige” (221).

Tappy trims the fat, which has two effects: it allows us to direct more attention to the words and spaces on the page—even more so than other sparse poetry, because the ample blank space allows the words to resonate in our heads—and makes repeat readings of the poems especially pleasurable. After reading the poems once, the reader begins to imagine Tappy as a weaver whose threads form varying patterns but are continuously present. To re-read “the mauve hearts of the thyme bushes / open a passageway / in my disorderly road” is to imagine it more and more clearly, and to grasp the function of this seemingly impossible personification more and more tightly (“Wandering Mortal II” 31). A poem like this may seem whimsically baffling at first, but the function of its personification, the endowing of a heart to a plant, the order inside disorder, only makes sense after these threads have been identified and tracked through all of Sheds.

Sheds is gratifying to read all at once because its author’s poetic approach is consistent from beginning to end, the way filmmaker Wes Anderson is consistent with color and composition. “Tappian” themes such as the reconciliation of opposites and the conferring of agency onto objects are ever present, though never exactly the same twice. Rising/falling and coming/going motions, holding each other in equilibrium, pass in and out of Sheds. (A concordance of Sheds would no doubt demonstrate the heavy symbolic importance of wind, water, earth, below, and above in the early poems just as much as the recent ones.) This structural coming and going itself mimics a wave, proving that Tappy is the type of master who can work on any level; there is cohesion and consistency among words, verses, and indeed the entire oeuvre.

The Wandering Mortal poems are remarkable for their use of the second person: the first stanza begins, “The fresh water / of your voice flows / into my thirsty throat,” building an unusual intimacy in the form of a watery bridge between “you” and the poetic voice (19). Having thoroughly engaged us, the voice begins to give us a tour through its world, leading us in all directions. In the second poem of Wandering Mortal, we rise up into the sky, then plunge into the sea: “A coat spread like wine over the sky” transitions to “a lost fish / in the depths of the sea” (29). But the vertical movement isn’t enough; Tappy’s concepts are never as simple as a single dichotomy or a single dimension. The next page has the narrative voice “staring afar / at that swaying palm / like a hand waving / from the rooftop of the night” (30). The poem’s movement is lateral as much as it is vertical, but somehow all this shifting feels clear and simple. Taylor, always respectful of Tappy’s rhythms, is sure to preserve the natural, quiet flow of each verse while keeping an eye (and an ear) out for the syllable count of each word or line. One gets the feeling that to read Taylor is to read Tappy, a rare phenomenon not easily (or often) achieved in the field of poetic translation.

To say that Tappy maintains her motifs throughout her poetic career is not to say that her work is stagnant, and it certainly does not indicate a lack of ability to change. We can see in Elementals (published some twenty years after her first collection, Errer mortelle) that the poet has condensed her ideas into fewer lines: what she used to do in two pages can now be accomplished in one verse. “From down below / like a storm / the leaf rises // falls // the invisible swell / of a hurricane” (167). The up/down motif is as prominent as ever, while the water here is implied — “storm”— rather than named. The mysterious or surrealist element has also developed in these later verses. Where an early Tappy object might be carried or pushed, the leaf here seems to levitate without force. The universe has become more self-sufficient, more concise, and more complex all at once.

One of the biggest questions for me as a translator has been how to approach lines that are intentionally confusing or surreal in the original. Some words are meant to be slippery, and to convey that without trying to “solve” an enigma or over-clarify, is always challenging. Taylor brings these poems over with a light hand and a sensibility for the indefinite. His version of a verse on the penultimate page of “Tombeau” is exemplary: “cradle you / like a rowboat without oars // for a shroud / a wrinkled wind / invisible to the living” (211). We know exactly what Tappy means, and at the same time we don’t. This is her most moving piece, a reflection on death and grieving that is devastatingly direct without a trace of sentimentality or confessional phrasing. The way that both poet and translator have communicated what can never be directly said is a testament to their brilliant conceptual minds. Sheds may be a complete collection for now, but I hope more of Tappy’s poems and Taylor’s translations are in the works.