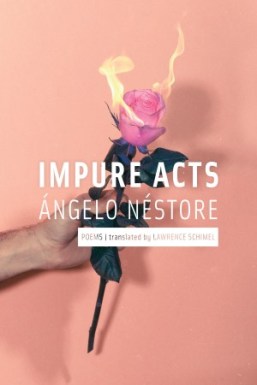 Ángelo Néstore has already accrued a vast array of accolades at the age of thirty three. He works as a poet, actor, and professor in the Department of Translation and Interpreting at the University of Málaga in Spain. His collection of poems Actos Impuros won the 32nd Hyperion Poetry Prize. His poems present and ponder what constitutes his identity in regard to external views, expectations, and entrenched societal structures.

Impure Acts, translated by Lawrence Schimel, constantly butts up against and chafes with standards of masculinity and gender, flexing and pushing against the brittle and rigid concepts that conflict with the lyric speaker’s experiences, desires, and concepts of who and what he is. Néstore’s poems are grouped in four sections, each pertaining to the collection as a whole but with a specific focus therein: The Body Almost, Pelicans Die of Hunger, Imagined Daughter, and Songs to an Empty Crib. Each section opens with two quotes in both Spanish and English. The sections organize the poems by theme, though each section blends beautifully into the next. Schimel guides the reader through Néstore’s poetry in this bilingual edition.

In the first section, The Body Almost, the poetic “I”  struggles with his assigned male identity and explores his relationship with his family, beginning with his parents. In the first poem of the collection, “E io chi sono?,” he “abandons” his sex in the mornings, only returning when he strips for a shower (7). He lives the rest of the day, it seems, outside of the poem, free from the traditional connection between sex and gender. When he is alone at the end of the day, preparing to step into the shower, he confronts what he’s been told are the masculine parts of his body, looking at his shoulders that his mother tells him are just like his father’s (7). In the fogged-up mirror, everything is blurred and obscured. It’s one of the few times he perceives his body in a positive light, saying that the steamed-up window makes his frame appear “more lavish” (7). With blurred lines and less definition, the poet is more pleased with his body as not shoehorned into a seemingly arbitrary category. In his mind’s eye he confronts his mother about who he looks like, hiding his genitalia between his legs, yearning to break from the patrilineal inheritance of masculinity he abhors.

Néstore delves deeper into this inherited masculinity in the poem “If My Father Tells Me.” Here, the reader witnesses him react to the standard of traditional masculinity that his father holds him to:

If my father tells me: Be a man,
I shrivel like a grub,
stick my belly on the fishhook.
Soft like some mollusk without its shell,
I feel dismantled, keep my cool.

I then ask myself
what use was learning four languages
if words can’t be heard beneath the water,
if I only know how to write poems. (9)

Néstore’s father quotes an age-old saying, telling his son to “Be a man” (9). The dissonance between the poet’s own lived experience and the archetypal male figure his father expects him to be makes the poet come undone; he feels taken apart, rendered internally into a soft, grotesque, unpleasant creature devoid of form and structure. Externally, Néstore manages to “keep [his] cool” without belying his inner conflicts, and the poem hones in on his distress. His father holds a traditional view on gender, espousing patriarchal notions of masculinity. The speaker’s frustration at the close of the poem comes from his incapacity to communicate his diametrically opposed sense of self to his father, and that no matter how many languages he knows, how many poems he writes, he won’t be heard or understood.

All throughout, in poems such as “E io chi sono?” and “Directions for Use,” the poet explores some hard hitting aspects of gender dysphoria, skillfully articulating the discomfort and distress caused by aspects of one’s own body and physical sex not aligning with one’s gender identity. In “Directions for Use,” a poem in Néstore’s last section of the collection, Songs to an Empty Crib, he writes: “You can’t give birth. / Not now. Not ever. / Get used to the idea. Didn’t you read the directions for use?” And then the poem concludes, “One cries for the dead, not for those who haven’t been born. / You have no reason to be sad” (59). This bleak, brutal, matter-of-fact poem captures the confusion and dismissiveness that people with varying degrees of gender dysphoria face from other people. Both poet and translator easily transition from longer, more flowing poems to curt, blunt, and stark poems, highlighting the nuances between their sound, flow, and impact. In this poem, Néstore writes from an outside perspective talking to himself, offhandedly dismissing the speaker’s harrowing struggles with gender and reproduction in a flat, affectless tone.

Schimel translates Néstore’s poetry in a way that I myself envy. Translating the condensed complexity of Spanish into English often leads to long, ponderous lists of minutiae within a sentence that’s easily packed away into a brief quip in the source language, but Schimel manages to re-package all of Néstore’s nuance and emotion elegantly into English set right next to the original. Not only do his lines carry the same weight and impact as the original, but Schimel meticulously molds and shapes them to parallel the original’s structure beautifully. It comes as no surprise that his translation of Impure Acts is a finalist for the Thom Gunn Award for Gay Poetry.

Impure Acts portrays Ángelo Néstore’s relationship with gender, sexuality, and family. Looking at the body of works as a whole, he presents the subjectivities of individuals whose lives and identities exist outside traditional norms. The titular “impure acts” are the identities and experiences portrayed that go against what is considered pure, simple, and correct by the disciples of traditional society. His poem “Monster” portrays the quintessential nature of the collection’s goals. Néstore writes: “I want to raise suspicions,/ have men shout at me in the street/I want to wander through malls, public parks,/ and for mothers like my own to get up and lower their gazes/and later, as they prepare dinner for their children,/ to be briefly assaulted by the memory of a new race of men” (11). Néstore’s brilliant and impactful writing stands out among that of many modern poets I’ve read, articulating these “impure acts” with a phenomenal mastery of language and insight into the psyches of many individuals in the LGBT+ community who confront these problems of tradition every day of their lives.

Griffin Nosanchuk is a student at Oberlin College who translates from Spanish and studies psychology and archaeology.