Foam of the Daze, translated to the Screen

Despite being a highly cinematic book, when Boris Vian’s L’Écume des jours was published in 1947 it would have been difficult to imagine a film capable of equaling its fantastical imagination in technological effects. Now, we have the capacity to bring to vivid life even the most impossible ideas, but it is to Michel Gondry’s credit that his recent adaptation of the book, translated as “Mood Indigo,” stays within a surreal visual universe, rather than relying on the hyper real visual effects to which contemporary movie goers are accustomed. Gondry’s film owes a debt to surrealist pioneers, skirting the literal and ingeniously realizing Vian’s outlandish details with recognizable objects combined in surprising ways. The influence of Luis Bunuel is immediately apparent from the opening scene, taken straight from Vian’s text, in which the protagonist, Colin, cuts off his eyelashes and washes them down the drain during his morning ablutions. This is a world that looks remarkably like our own, though with some key innovations, and its darkly human message is immediately relatable.

Producer Luc Bossi and Gondry’s screenplay is admirably faithful to the book. The liberties it takes feel like welcome additions in a conversation with Vian across visual languages. The film narrative is framed by assembly line workers typing the manuscript of the book, as its scenes unfold. Seated at endless rows of typewriters that pass quickly on conveyor belts, the factory workers lend a dystopian context to the otherwise very innocent love story. While not present in Vian’s novel, the device visually conveys the power of destiny in the narrative. As Gondry also acknowledges in an interview published at FSG’s Book Keeping, “it shows that the book is inescapable… Because when you read L’Écume des jours, you have the impression that the ending has already been written and there is a strong sense of the inevitable. It’s a fatalistic book.” The simple plot, in brief: Colin falls in love with Chloe, they marry, and she soon falls ill with a water lily in her lung. Wealthy Colin is forced to work for the first time in his life, and eventually goes bankrupt, keeping Chloe surrounded by fresh flowers, the only treatment for her condition. Colin and Chloe are joined by two supporting couples in a world where love is the highest virtue: Chick (Gad Elmaleh) who eventually abandons Alise (Aïssa Maïga) due to his addiction to purchasing Jean Sol Partre paraphernalia—Vian was a member of Sartre and de Beauvoir’s circle, his wife dated Sartre—and Nicolas and Isis (Charlotte Le Bon). Nicolas, played by a magnetic Omar Sy, is Colin’s personal chef and friend, and uncle of Alise.

It is in the film’s kinetic play that it most succeeds, and hardly a charming detail is spared from Vian’s novel. Rarely is there stillness, from Nicolas’s twisting and recombining dishes, beautifully created by Stéphane Rozenbaum from photographs of tactile fabric models in stopmotion animation, to the many anthropomorphized objects. Colin’s shoes tie themselves but escape to join the other canines at Isis’ birthday party for her dog, barking and growling; his tie refuses to hang and must be nailed to his chest before his wedding; the doorbell is a cockroach alarm clock, which at one point reproduces. The tremendous biglemoi dance, while not in the least bit sexy, is interpreted by Gondry as a gumby-legged gyration that looks as bizarre to us as boogie-woogie must have appeared in 1947. The myriad strange and surprising details are what make the book, and the movie, such a delight to experience.

One moment from the book I had particularly looked forward to seeing on the big screen, while creatively handled, disappointed. It is only a few lines in the novel, but its significance is underscored by the fact that its cinematic representation is the single image most associated with the film’s promotion. In Brian Harper’s translation, the scene reads:

They were walking, following the first sidewalk they found. A little pink cloud descended from the sky and approached them.

—Shall I? it proposed.

—Go ahead! said Colin, and the cloud shrouded them. Inside, it was warm and smelled of sugary cinnamon. (47)

Descending just in time to save Chloe and Colin’s awkward first date, the cloud encapsulates the innocent charm of Foam of the Daze before the story veers quickly toward its tragic and inevitable conclusion. This is the world organically reimagined by lovers, where talking clouds provide sweet-scented privacy. In Gondry’s overblown interpretation of this scene, the cloud is a mechanical, coin-operated amusement ride, carried by a crane over a giant construction site. The cloud later deposits the two lovers on a park bench, and out pops a camera to take pictures of their first kiss. While certainly clever, Gondry misses the simple magic of a personified cloud wrapping the couple in its warm glow, a visual feat that would have been much simpler to film. 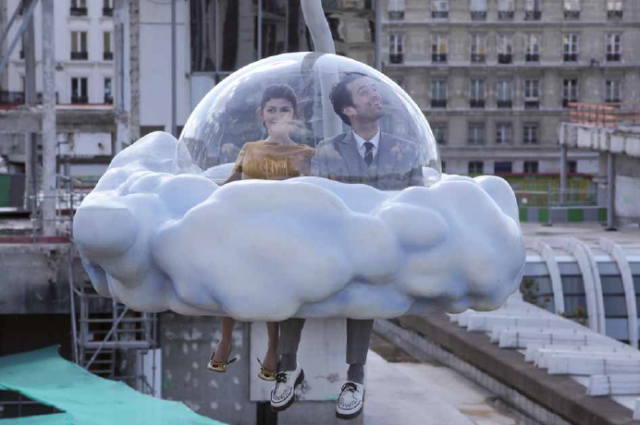 “Because the visual universe was going to be very striking and graphically very strong, we needed strong actors with whom the audience can identify,” Gondry explains (FSG). I imagine, in addition, Audrey Tautou made an appealing choice for the female lead due to her international recognition from the indie hit “Amélie.” Though Vian’s characters are archetypal, the all around excellent cast brings as much dimension as possible to their performances, making the film’s tragic conclusion all the more affecting. Tautou brings the lightness and innocence of a younger woman to her early scenes with Colin, while her steely optimism in illness is particularly moving. Colin, played by the dashing Romain Duris, also navigates the story’s rapid transition from romance to tragedy with depth, bristling at the arbitrary unfairness of life as only the privileged can. But it is Alise’s alluring performance as the true heroine, the only character who challenges her fate by taking a heart-snatcher to Jean-Sol Partre and all purveyors of Partre paraphernalia, seducing a vulnerable Colin when his wife can no longer offer him comfort, that I enjoyed most in both the book and the film.

Luring viewers in with its visual enchantments, Mood Indigo deploys them just as palpably in its ultimately pessimistic conclusion. Colin’s despair is heightened by his aimless shooting at water lilies with a miserably bent gun, one he has “grown” by lying naked on a bed of earth in one of his ill-fated jobs. As Chloe slips from the world, Colin’s apartment shrinks and the film darkens to black and white. Colin stumbles into the book factory, struggling to keep up with the flow of typewriters, attempting perhaps to change the course of his fate. He succeeds only in stopping up the orderly flow of the work, and must be forcibly ejected. Later, the books are bound on sewing machines, and Chloe’s childlike doodles, salvaged from Colin’s apartment, are incorporated as well. The book is indeed inescapable, but Gondry succeeds in seducing us with Vian’s surrealist delights, only to snatch our hearts—no small feat.

More Vian at Reading in Translation:

My review of Foam of the Daze translated by Brian Harper.