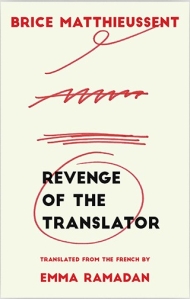 *In interviews in 2009 and 2010, French translator Brice Matthieussent explained the idea for his first novel. In the 1990s he told publisher Christian Bourgois that he dreamed of a book where the text would be absent, available to the reader only by imaginative inference from translator’s notes. Each page would also be a visual-arts project, split into two canvases separated by the black line that typically runs between text and footnotes, and interpretable in many ways. Above, the blank space could be the sky or an upstairs apartment, for example, and the reference asterisk * a star or lightbulb. The black line itself would be the surface of the ocean or an apartment floor, under which a translator would darkly move…

Listening to Matthieussent speak, one expects that Vengeance du Traducteur will be a Joycean-Proustian Künstlerroman in which the protagonist will start out as an obedient young translator, invisible and scurrying among dictionaries, then have a bilious period in the Dostoyevskian underground, and finally rebel by disrupting the text he’s supposed to be translating. He’ll expurgate everything from unwanted adverbs to uncongenial characters to “whole pages” before finally toppling the God-Father-Author and seizing control of the writing (Revenge, 10). Since Matthieussent mentions that the novel draws upon his own experience of switching from translation to fiction writing, we suspect that some of this Oedipalism will be autobiographical.

This guess turns out to be pretty accurate except that Matthieussent skips the character development and starts right off with a fuming translator, Trad. (From traducteur, French for translator.) Thus, unfortunately, we never understand Trad’s personal motivations apart from his perceived lesser position in a hierarchy. The author at whom he spits venom similarly lacks a compelling back story, and Doris, the only significant female character, is mainly a sexual object for the two men to dispute, often in cis-het sex scenes as normative as one can, but need not, imagine.

All of this prevents us from identifying with characters and accepting the book as a coming-of-age tale, but it’s a hard read for other reasons, too. The “pictorial” aspects are no more creatively developed than they are at the top of this page, and the plot becomes swirlingly metapostmetaphysical for, as Alec Joyner perfectly summarizes it, the Revenge of the Translator we hold in our hands is “an American translation of a French novel about a French translation of an American novel about an American translation of a French novel.” There are also characters who struggle to accept their fictional status, like Buzz Lightyear in Toy Story, or who confront their author physically, as in Flann O’Brien’s At-Swim-Two-Birds or the film Stranger than Fiction.

Exhausting as the unresolved metafictionality is, what really slows the text is the commentary on translator-author relationships. (Joyner speaks of a “profuse, almost ecstatic production of conflicting metaphors.”) The obsession at the heart of Revenge is not any worry over the possibilities for translating between French and English as languages or France and America as cultures. It’s the age-old author-translator conflict for which Matthieussent seems eager to produce an encyclopedia of descriptions, scenarios, and theoretical questions. This helps explain why it takes 215 pages to reach the moment when the translator usurps the role of author. “I’m levitating!” cries Trad, and we notice that the black line separating text from notes has disappeared. It’s obvious why it’s gone, but Matthieussent piles on interpretive imagery: it was the “line, bar, foundation, support, shelf, box spring, pedestal, partition, first ceiling and most recently floor…” (216) Across the whole text, some of these framing devices are entertaining, some provocative, and some the verbal equivalents of sight gags.

Given the way the novel screams for its translator to take revenge, and given the archetypally retro-Oedipal sexual structure where toxically masculine wannabe patriarchs struggle over a bride prize and the power of the pen, it is interesting to compare both the text with its translation and the figure of Trad with his real-life translator into English. Emma Ramadan may best be known as the translator of the experimental, feminist author Anne Garréta, whose Sphinx she published with an informed and enthusiastic translator’s note.

Tellingly, there’s no note this time. In a series of diaristic entries currently running in the The Quarterly Conversation, Ramadan discusses her translating activities and in so doing evokes many attitudes that reveal the cyclopia of Matthieussent’s encyclopedism. She’s a woman who translates as part of a team and for whom translating is not the most important thing in an otherwise busy life — three possibilities that don’t cross Trad’s mansplaining mind. The way she describes her approach to translating Garréta and her experience at an academic conference further suggest that she was ill suited for an overthinky piece of macho metafiction:

My translation partner and I were hyper-focused on the word level, how to translate the narrative quirks of the young girl, Garréta’s rampant wordplay, her transformation of language. Before it’s our turn to speak, the other two panelists, academics, talk about the actual content of the book [Dans l’béton], what it’s doing, its themes, its successes, in the way that I imagine most academics do at academic conferences. I was blown away by how deep they were able to get into this book…

With attitudes so foreign to those canvassed in Revenge, Ramadan was ideally positioned to take the bait it offered, to construe herself à la Trad and seize her chance to become a shaping, disruptive cultural force. She didn’t, but the paradox is only apparent, as is suggested by how she translated the opening sequence. Revenge begins with Trad speaking to us from his abject footnote-space, not so subtly asking us to reverse the traditional authorial privilege. To invite and seduce us to his perspective, he uses the informal “tu” and an imperative, present-tense verb, “franchis,” as he implores us to “cross over” to his side: “Bienvenue à toi, cher lecteur, franchis donc le seuil de mon antre.” Ramadan’s tepid version erases his exhortation and switches to the past tense: “Welcome to you, dear reader, who has crossed the threshold of my lair.” It’s as if she doesn’t accept Trad’s self-styled disenfranchisement as a live problem, and rejects the agitating and embittered translator figure upon which the book depends.

If Ramadan’s translation of “franchis donc” were a conscious, significant choice, then one could argue that she used it to show her cards, that her “revenge” was to deny and overwrite the premise of the original. The more likely, intriguing interpretation is that this mostly “invisible” translation indexes Ramadan’s attitude. If, as she put it in The Quarterly Conversation around the same time Revenge was published, the “urge to translate a book comes from seeing what it can do for a reader emotionally, what it does to me emotionally, how it can impact the way people feel in the world,” then it’s easy to see why she wouldn’t bite harder on a book that left her unmoved.

← “Free falling through the subconscious”: Pablo Neruda’s “venture of the infinite man,” translated from Spanish by Jessica Powell
Decline and Fall: “Eventide” by Therese Bohman, translated from Swedish by Marlaine Delargy →